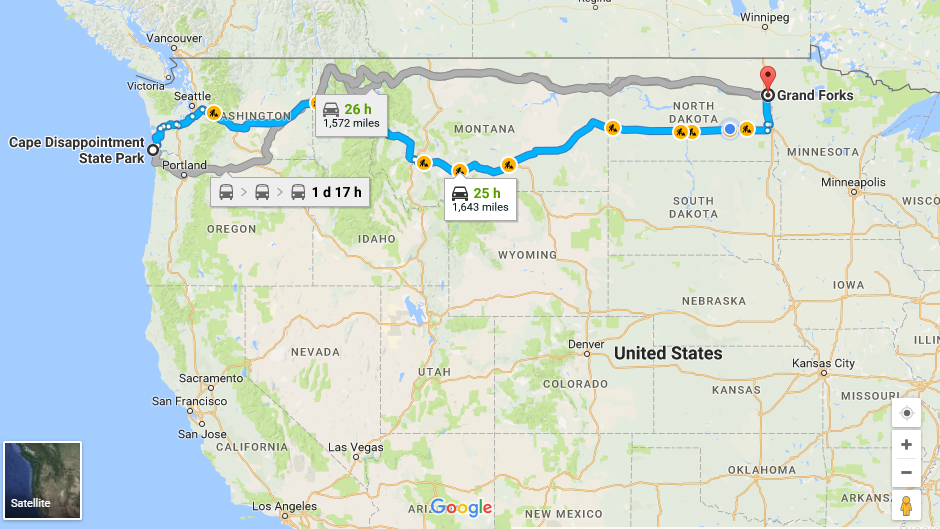 We began our long and arduous journey home at 10 am, Pacific time, after a weird and somewhat cryptic conversation with the store keeper. We preferred his wife, she was a nice woman. This dude was odd as heck. Anyway.

We woke up at 9 and packed up the tent and repacked the car, and then we were off! On the road back out to Ilwaco, we saw A MAMA BLACK BEAR IN THE MIDDLE OF THE ROAD. Oh boy did we get excited. And then, we looked to the right and there, in the tree, just chillin’, was a little black bear cub! We died, he was so cute. We sat there for about 3 minutes, and then he climbed away and we also climbed away, except we were in a car so it was more like we drove away.

We drove north on Highway 101 for a while, and then I think we took something that may have been a highway 18 or a highway 7. Either way, it took us to I-5, which led directly to I-90. After that it was a straight shot west; it could not have been any easier. We stopped on occasion to use the bathroom, to get some food, and to stretch our legs, which usually happened because the one of the first two were occurring. I drove from literally the coast of Washington all the way to Billings, Montana. A solid 17 hours of driving through two and a half states (I’m totally counting the 80 miles we drove in Idaho as a state) under my belt. After a brief stop in Billings, we continued on our merry way. Jennifer drove from Billings to Dickinson, ND, and then I continued dirving all the way back to Grand Forks. In retrospect, that was probably not a great idea, me driving for like, a bazillion hours with little-to-no sleep. But hey we didn’t die, so score one for us!

We made it back to Grand Forks around 5 pm on Saturday, and by 8 pm we were back on the road. Sara was driving this time; we packed her car and took off for the cities. I curled up in the back seat and slept for about an hour and a half or so, bringing my grand total of hours slept in the past 36 to about two. Woo!

The three of us made it to the cities around 1 am, and after Sara and I said our goodbyes to dear Jennifer, we made our way south to our MN home. We arrived around 3 am, and we didn’t even bother to unpack any of our things. We practically fell into our beds and passed out until 1 pm on Sunday.

The following week was one of rest and recuperation. Sara and I didn’t do much, other than go on long walks and watch American Horror Story: Hotel. If you haven’t seen it, you definitely should. Lady Gaga is queen.

And with that, the saga of our super epic road trip is done. It was a really freaking awesome week, full of mountains and forests and oceans, and while I did put 3700 miles on my Jeep I’m gonna go ahead and say it was totally worth it.

Thanks Jen and Sara, for proving to me that we are adult enough to handle a road trip on our own. Till the next one! 🙂

Washington, another state I had never been to before this trip, has officially stolen my heart. Sorry, Minnesota, you may have a bit of competition! The mountains, the forests, the lakes, the fog, the rain, the everything. My photos did not do this state justice.

We drove the last six hours to Sol Duc, the campground where we would be spending the night. Sol Duc is located in the Olympic National Forest, in Washington’s beautiful Pacific Northwest region. Or, as Sara liked to call it, the GNP (Greater North Pacific), which should not to be confused with the GOP (Grand Old Party). We pitched our tent, a feat which all should be thoroughly impressed with. It took a bit of effort, but we did manage to make it stand up (by itself!) in the end.

We then decided to hit up all of the trails that we could. Sol Duc is home to a gorgeous waterfall, appropriately named Sol Duc Falls. We wanted to make our way to the falls, and then on the trail to Deer Lake. To reach the falls, we went on a path called Lover’s Lane. Not sure why it was named this, as the path was terribly maintained and would likely cause lovers to unlove each other due to it’s ability to cause tension and arguments regarding which way to go. Luckily for us, we didn’t like each other very much to begin with, so Lover’s Lane did not have the disastrous effects as it would on people who do actually like each other. 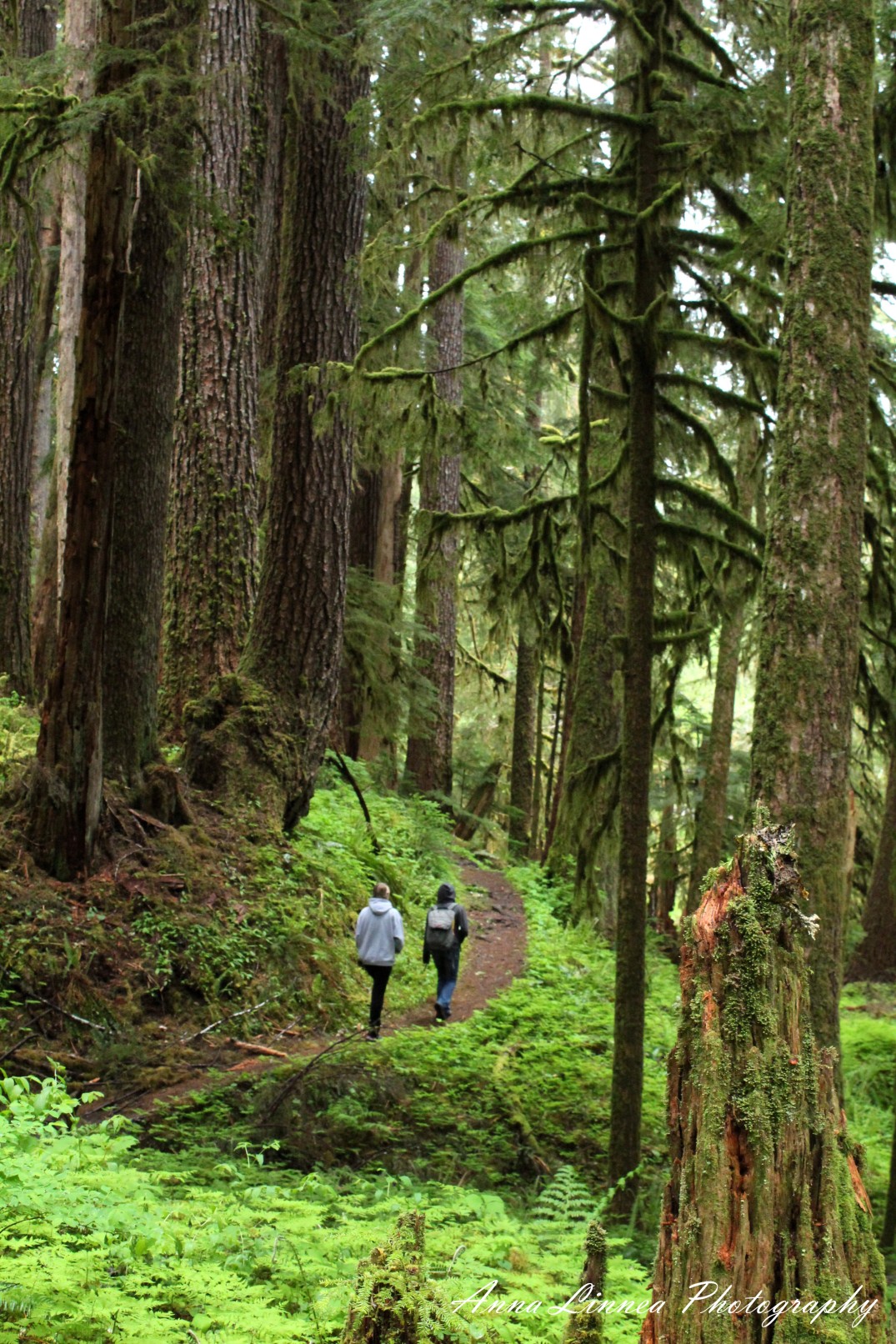 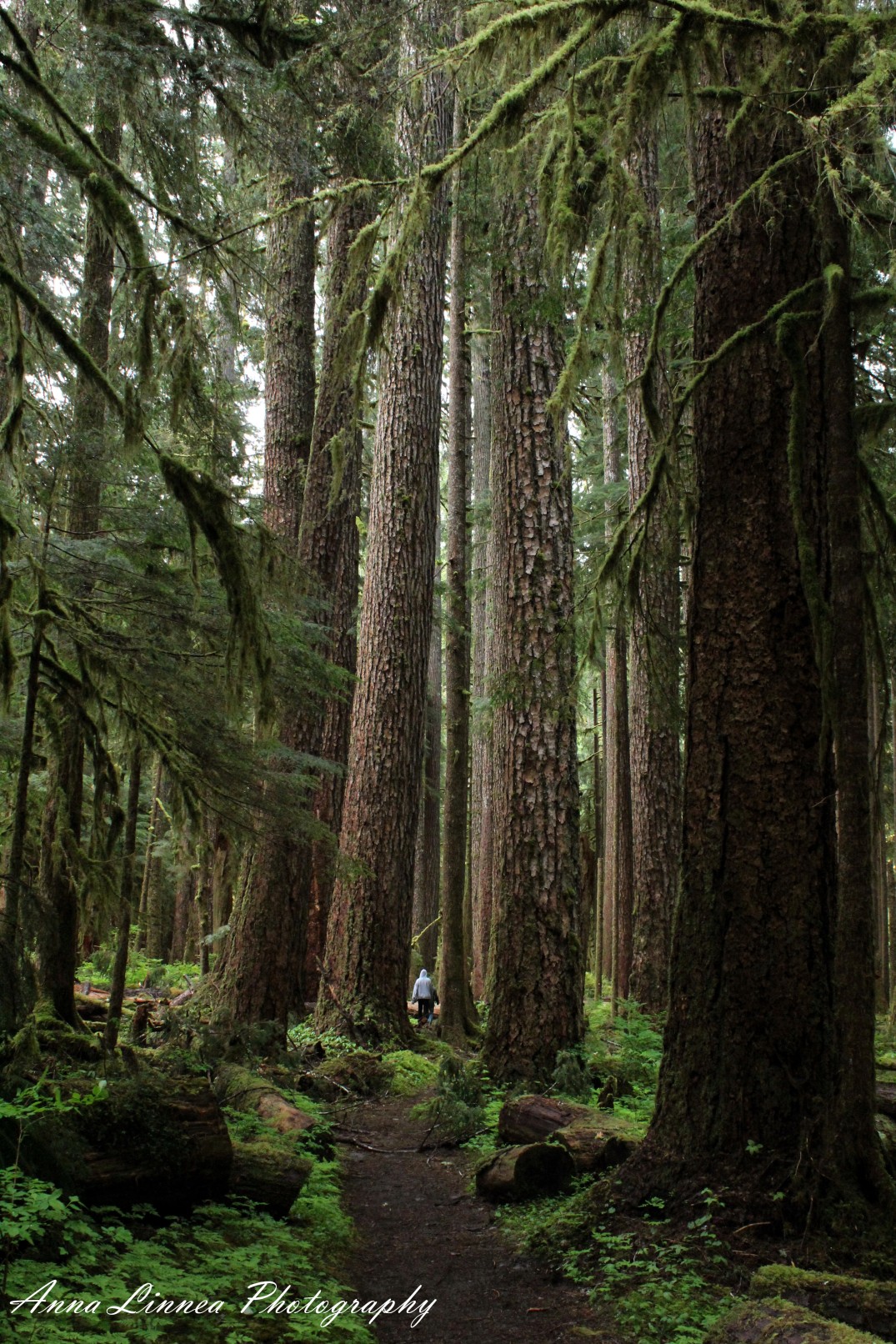 After what seemed like an year and a half, we made it through Lover’s Lane and out onto the super-fancy, super-nice path that led to the falls. We followed this path for about a mile, all the while hearing the falls roaring in the distance.

It was a bit chilly and rainy on our walk, and the spray from the waterfall only assisted with making us more damp. It was a lovely waterfall, however. Even though it got my camera all wet. Sad day.

Just past the falls was the path for Deer Lake. We had read about Deer Lake in little pamphlet that the park ranger had given us upon check-in. It was about a 4-mile hike, which sounded like a good way for us to get out and stretch our legs after driving for the last 9 hours. We started the hike, and it was really uphill and rocky. The path was essentially a dry creek bed that they had somewhat improved by strategically placing rocks and/or building some steps and bridges. And I use the words “dry creek bed” lightly, as the majority of the creek bed had some water running through it, i.e. wet socks, wet shoes. Everything was so squishy damp. So squishy damp.

So we hiked uphill on this dry creek bed for a long time, and eventually we were like, “Wait, is this another mountain?” And sure enough, we doubled checked the pamphlet from the ranger and it said that Deer Lake was indeed a mountain lake. Meaning that it is a lake hidden in the mountains. The snow was a bit of a give-away, as well.

We really need to start reading the fine print when people give us information. 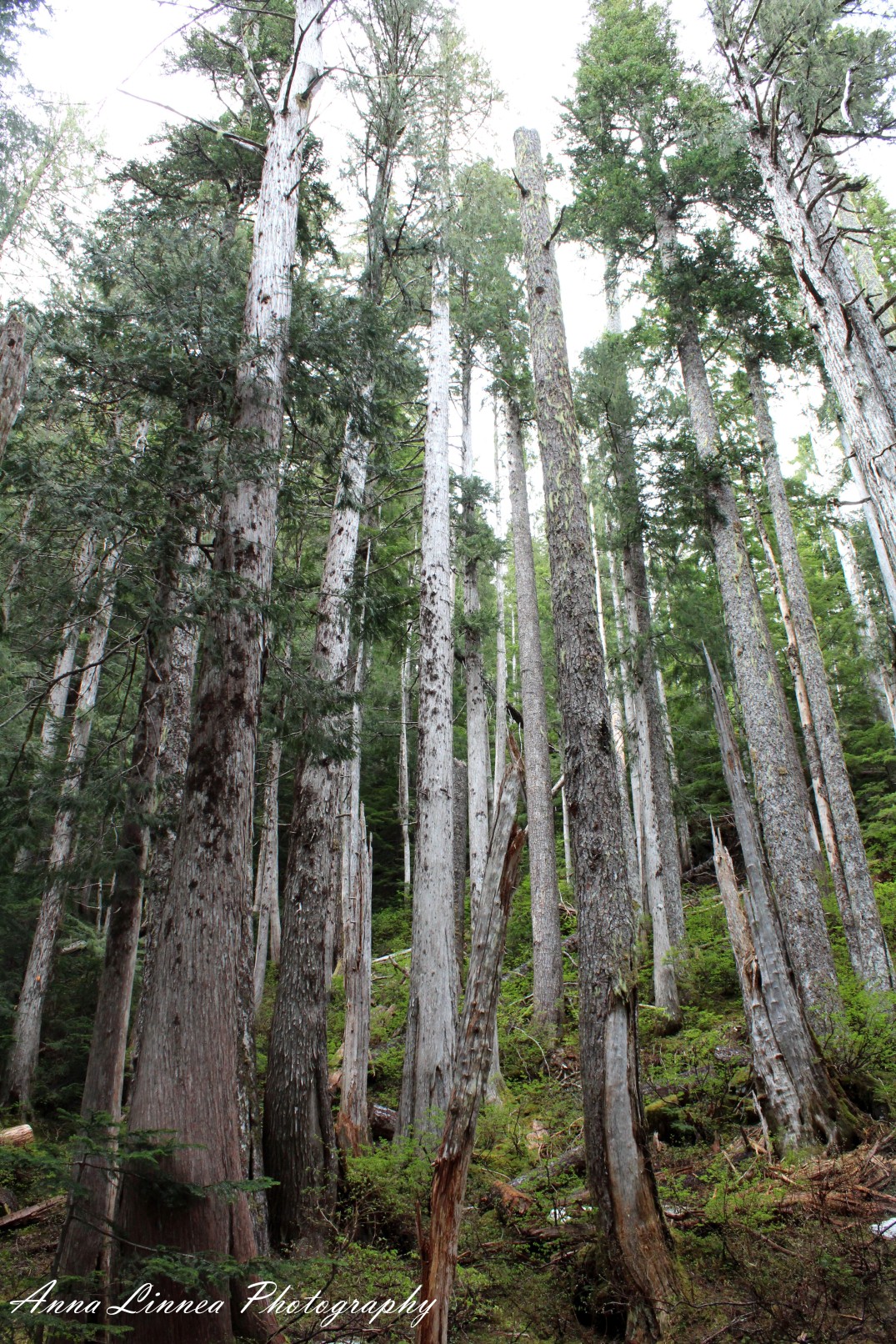 So we made it to the top of this mountain, and we found Deer Lake. Sara, our line leader for this expedition, shrieked with excitement when she saw the lake, which spurred Jennifer and myself on. We were thrilled to be off this weird trail.

The lake was absolutely gorgeous. We sat on the wooden bridge for some time. Jennifer ate an apple and a granola bar. We all took a few hearty swigs of water. After a few moments, there was some fog that began to form. It was lovely fog, all heavy and wispy at the same time, and it came down from the mountains and covered the trees across the lake. I had never seen fog descend on a place like that, so that was pretty neat. I got a few neat photos too. 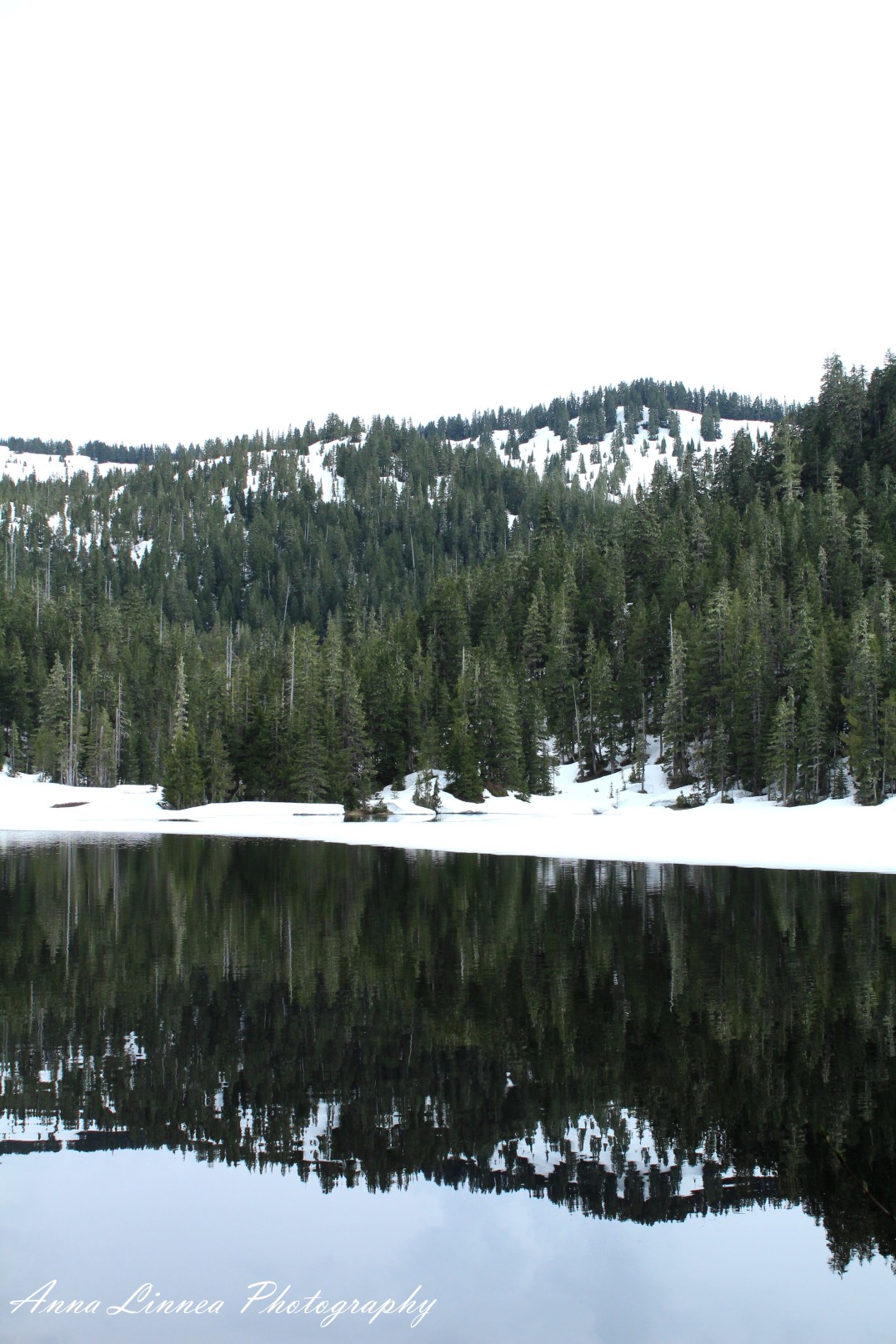 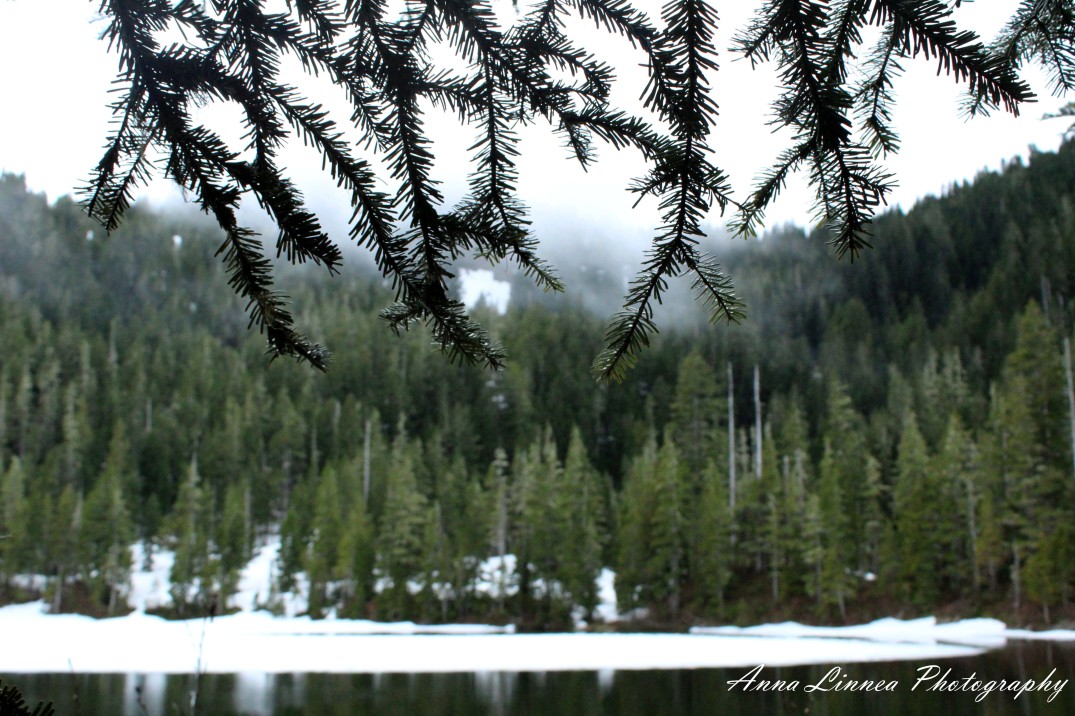 Sara and Jennifer had continued on the path; we were going to attempt the trail to Mink Lake, which would then lead us back to out campground. I think. I wasn’t 100% sure on the logistics of this hike. I was more focused on taking photos of the trees and the moss and the water. Which I did. I just followed Sara and Jennifer, and trusted that they knew the way. Or at the very least that they could interpret the map.

So I was busy taking pictures of the fog while Sara and Jennifer forged ahead on the path, and about six minutes later I hear Sara yelling at me, asking me what the hell I was doing. So I was like, yeah yeah I’m on my way when in reality I was still snapping a photo or two. Oops. 🙂 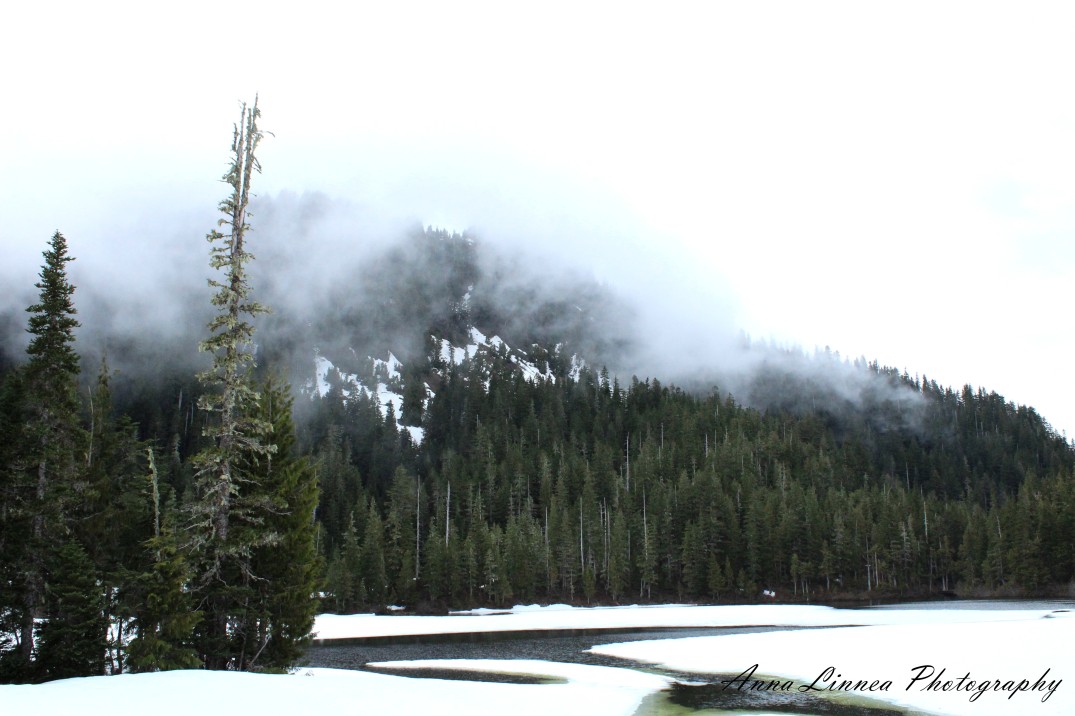 I did make my way to them, however, and the path had effectively disappeared under the snow. So much snow. We made our way across a slough covered in snow on the south side of Deer Lake, and then there was just an open field of snow with no tracks from previous hikers. We were effectively screwed. Sara and Jennifer really gave it their best effort, in their attempt to find the trail.

We wandered around for about half a mile before resigning ourselves to the fact that we will just have to go back down the dry creek bed trail. I groaned inwardly and sighed outwardly, but since going downhill is easier than going uphill I was mildly okay with it. I tried being the line leader for about two minutes, and I ended up falling down and getting my shoe severely stuck in the snow. Jennifer had to retrieve it for me, which was harder than it sounds because my shoe was really stuck in there. I was a little embarrassed so I just went back to my usual spot in line, bringing up the rear. We ended up running down the mountain path again, but this one was much more rocky and dangerous so we stopped after about half a mile.

After what seemed like a forever amount of time spent walking (you know, it’s really hard to keep going when your butt and thighs and calves are sore and you haven’t slept more than an hour and a half in the 28 hours), we finally made it back to the waterfall, but then it was still quite a jaunt back to the entrance of Lover’s Lane. Apparently we were feeling quite spry when we began our hiking adventure earlier, and practically sprinted through the path because it seemed much shorter the first time. We reached the entrance of Lover’s Lane but we had already decided that we were not going through that shit-show of a trail again, even though it was quite lovely and very Jurassic Park/Star Wars-esk. It was fun to traipse through the woods and rediscover the lost path, but we just did not have the energy for that. Hiking up and down a mountain in squishy damp shoes with sore butts, thighs, and calves can really put a damper on one’s attitude for adventure. We were also hungry. So, we walked out to the parking lot and decided to walk along road back to our campground. Which was fine, it just took an extra mile or so to get back, bringing our total for the day up to approximately 12 miles. Woo!

We found the campground, and we cut through the small bit of woods between the road and the campground to get back more quickly. I saw a giant log on the ground, and of course I decided to sit there and count the rings on the stump to see how old it was.

262 years old, in case you were curious.

So after this brief tree-ring-counting-detour, which took about 10 minutes, I made my way back to the campsite, where Sara and Jennifer were preparing their food for supper. I tucked right in, and after a hearty meal of sandwiches and s’mores and Cheerios and chickpeas, we went to bed. I was pooped. Which makes sense, because by that point I had slept for approximately an hour and a half in the last 36. Not a great track record.

We fell asleep listening to the sound of the breeze rustling through the moss on the prehistoric-looking pine trees.

And subsequently awoke to the same prehistoric-looking pine trees. 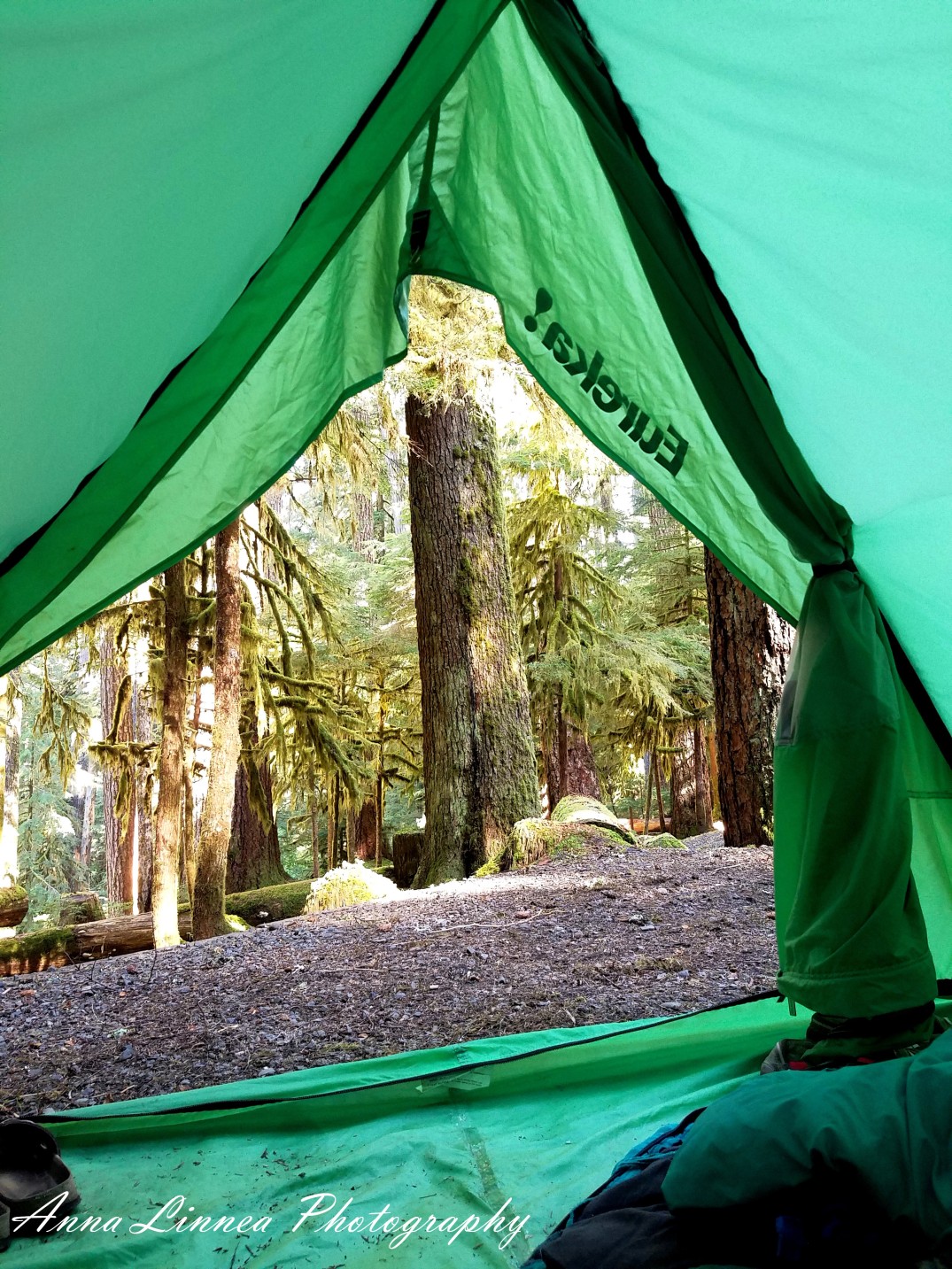