Okay. So the six individuals who are currently following my blog (with a passion, I’m sure) might have noticed that I recently went through a name change. The essence of the blog remains, which is flowers, accompanied as always by words. Words & Flowers. Makes sense, right? I thought so.

As a sort of “grand re-opening” to my blog, I should like to share with you a series of photos I took in the last week or so, of my most favorite of flowers, lilacs and crab apple blossoms! They really do capture the essence of spring, embodying it fully. They make me oh so happy. Seriously, just take a look at them! I’m sure that if you are in a bad mood, you will be totally in a much better mood after spending some time on my blog. Unless you hate flowers and find words to be particularly annoying, then perhaps you should go somewhere else. I’ll bid you farewell now.

For the rest of you that love (or in the very least, tolerate) flowers, hold onto your hats! It’s about to get a whole lot more pink, purple and white up in here.

First up, the lilacs. They’re pretty self explanatory, I should think. 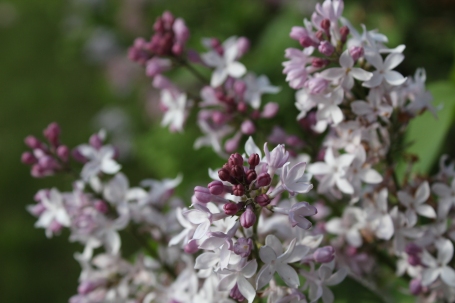 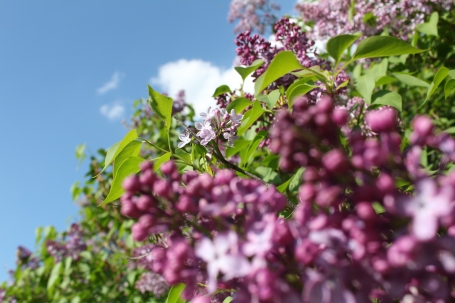 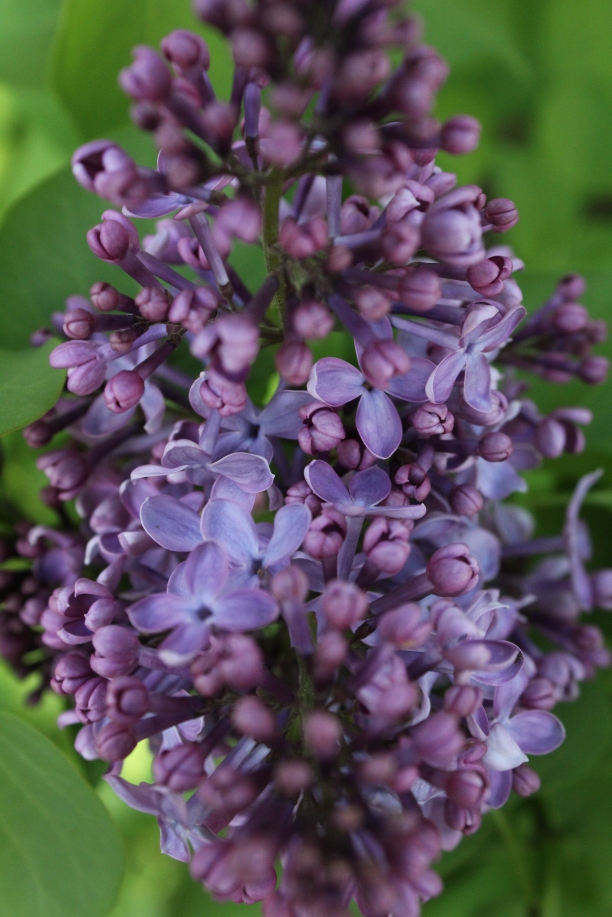 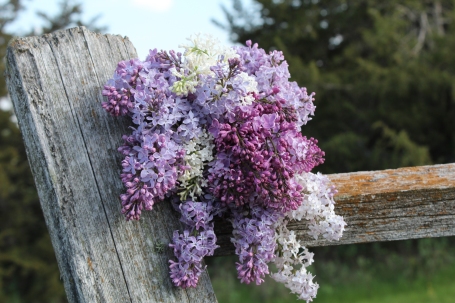 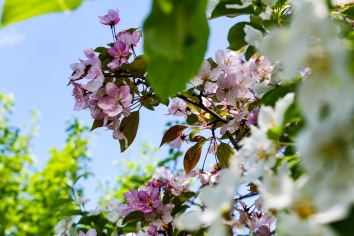 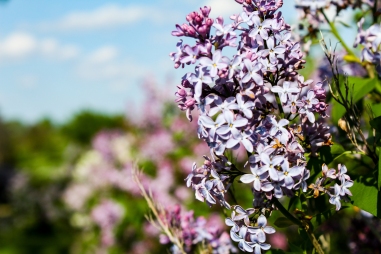 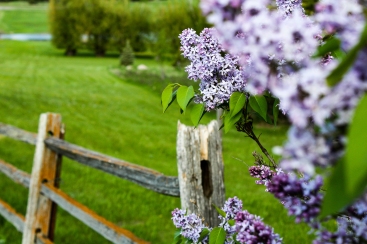 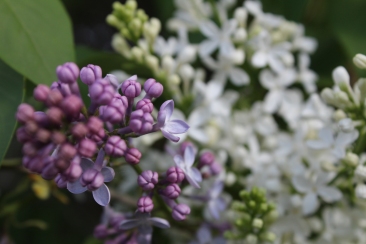 Oh aren’t they just lovely? You can almost smell them through the screen. If you’ve not ever taken the time to go out and put your sniffer to a lilac bush, you’ve been missing out on life. Now, if you are deathly allergic to lilac pollen, I am in no way encouraging you to go out and smell one, for your safety. Obviously. Anyway, they’re all but done blooming in this part of the land. A bittersweet time, spring is. The flowers bloom but ever so shortly, before giving way to plain old leaves. How dull. If you must, take a moment and go back to look at the beauty of the lilacs. I’ll wait.

Okay, now that we’ve twice examined the lilac flowers, let’s move on to the crab apple blossoms, in shades of pink and white. 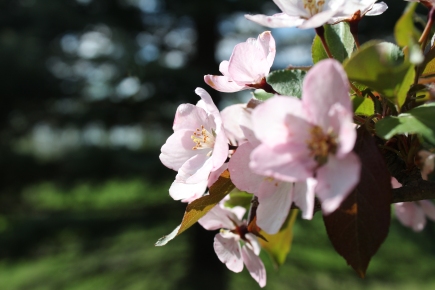 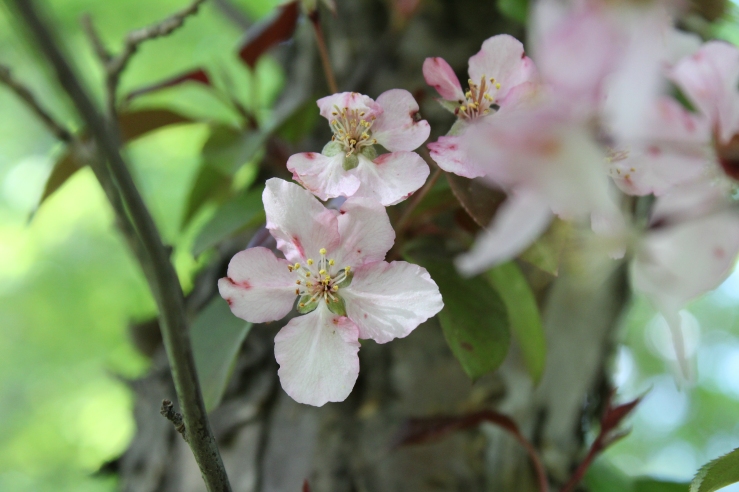 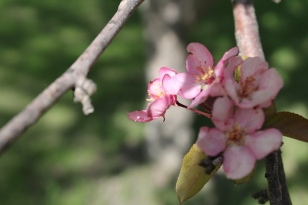 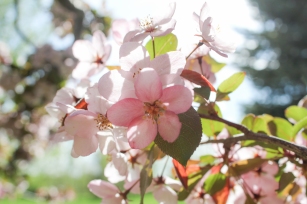 Don’t they just make you happier than heck when you look at them? I know they do for me! Such happy, cheerful little blossoms, just going along doing whatever it is that blossoms do. Obviously making people happier than heck is priority numero uno for them.

Alright, moving onward to the last section of flowers I’ll be showcasing in this blog. I went back to southern Minnesota for Memorial Day weekend, and there was a whole pasture filled with purple Dame’s Rocket flowers. According to the Minnesota Wildflowers website, this plant is invasive and must be eradicated. Um, no thanks. I like flowers too much to just kill them for being who they are. It’s why I hate to partake in any dandelion massacres as well. They’re only a weed till you get to know them. 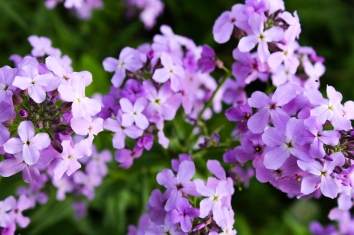 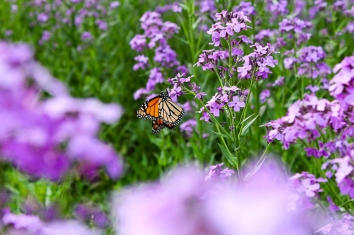 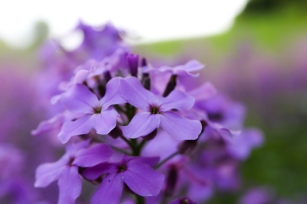 And there you have it! Words and Flowers, as promised. Expect to see more of the same soon. Soonish. Probably.

Have a wonderful day! 🙂

I love Minnesota. It is (in my humble opinion), one of the best states in the united collection of states that is America. But maybe I am biased. I am most likely biased. Nevertheless, I love Minnesota. To express my deep devotion to this state, I decided to make a list of my favorite things about Minnesota.

My home. I may have been born in Sweden, but I was raised in Minnesota. I have made this state my home, and I love it. I love the terrible accent that other states think we have, I love the deeply European roots that can be found in the small communities across the state, I love the changing seasons (even though winter can be a bit excessive at times), I love the emphasis we have on nature and being outdoors, I love the shape of this state, I love that we are home to the headwaters of the second-longest river in the United States, and I love the fact that we all say “Minnesoda” rather than “Minnesota.” Plaid is acceptable year-round, as are shorts. We have several claims to fame, i.e. Bob Dylan, Prince, and Charles Lindberg, to name a few, and we are home to the largest shopping mall in North America. I am proud to be from Minnesota, and I love every bit of this magnificent state.

Ice on the 10,000+ lakes of Minnesota is a great source of entertainment during the bitter winter months. Ice fishing, ice skating, ice sculpting, ice festivals; the list could go on, but I’m sure you get the picture. Ice is nice.

Nice people. I’m sure you’ve heard the term “Minnesota Nice,” which is a real thing. Minnesotans are genuinely nice people, quick with a smile or a friendly wave. I love driving down the road and getting a wave from the majority of people I meet. It’s great fun, and not at all creepy. For the most part. 🙂

Energy. Specifically, wind energy. In the last few years, an excessive number (yet, still not enough) of wind turbines have emerged on the horizon of southern Minnesota. The energy produced by these giant, white windmills is sent to Minneapolis and St. Paul. The farmers whose land is being utilized for these windmills are compensated, and hundreds of jobs have been created for the engineering, building, and maintenance of these turbines. It is quite amazing, and it is a step in the right direction to protecting our beautiful world by producing energy from a renewable source – the wind!

Springtime is absolutely gorgeous in Minnesota. A wave of green takes over the countryside; the flowers are blooming; farmers are planting their crops (hello again, corn and soybeans); birds are migrating north from their southerly vacations; people are finally emerging from months of hibernation; the wind is not out to freeze your nose off (only to make it slightly chilly); and bare feet are once again acceptable as footwear for the next six to seven months, depending on how tough you are. 🙂

Outdoor activities a-plenty. In a state with such an emphasis on outdoor-ism, it should be pretty obvious that there are no end to the different activities that you could potentially participate in. We have trails for biking, hiking, jogging, walking, cross country skiing, and snowmobiling; and lakes for swimming, skinny dipping, boating, fishing, ice fishing, tubing, canoeing, kayaking, water skiing, and ice skating. We have game trails for hunting anything from deer to pheasants to geese; and we have state and county parks for camping, whether you bring an RV or decide to rough it by sleeping in a tent. There is no end to the amount of adventure you can have in Minnesota. All you have to do is go outside!

Twin Cities, i.e. Minneapolis and St. Paul. The latter is technically the capital of Minnesota, but everyone knows that they are practically a single entity; you can’t have one without the other. The Twin Cities is home to a vibrant culture and several sports teams that all true Minnesotans love despite their terrible track records (the Vikings, the Twins, the Timberwolves.. someone has to lose, that’s just the nature of sports; do we care that Minnesota’s sports teams are always the ones to lose? Maybe a little, but it will take more than just a lack of winning for our love to waver). The Twin Cities was also named the Absolute Best City to Live In (in 2015) by a website called Patch of Earth, which compiled a list of the best cities in America, using data from previous “best of” lists. Minneapolis and St. Paul ranked 7th for the Greenest Cities in America; 5th for the Best Cities to Live in for Foodies; 4th for the Best Cities for Job Seekers; 9th for the Best Cities to Get a Job in 2015 (based on unemployment rates for that year); and 5th for the Best Cities for Walkability and Public Transportation. Pretty cool, huh? I guess the Twin Cities is the place to live in Minnesota!

Apples seem to be Minnesota’s forte. The apple breeding program at the University of Minnesota is pretty neat, and they have released 30 varieties of apples since the program began in 1888. I am sure you have all heard of the Honeycrisp apple; this particularly delicious bit of fruit was named the Minnesota State Fruit in 2006, and they are grown and sold around the world. If you haven’t yet indulged your taste buds to the delightfulness that is the Honeycrisp apple, I suggest you run to the grocery store immediately to purchase one or three or ten. You won’t regret it!

These are a few of my favorite photos from my week-long sabbatical at home in Minnesota. Flowers blooming, suns setting, lakes gleaming.. what more could I ask for?